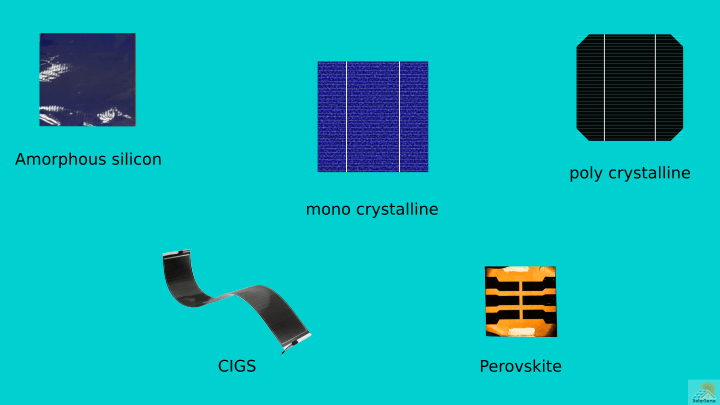 Solar cells, also known as photovoltaic (PV) cells, are photoelectric devices that convert incident light energy to electric energy. These devices are the basic component of any photovoltaic system. In the article, we will discuss different types of solar cells and their efficiency.

Scientists invented one of the earlier solar cells at Bell Laboratories in the 1950s. Since then, hundreds of solar cells have been developed. And the number continues to rise. As researchers keep developing photovoltaic cells, the world will have newer and better solar cells.

Depending on the material of construction, we can future divide each type into different subtypes. And they are explained below.

These solar cells control more than 80% of the photovoltaic market as of 2016. And the reason is the high efficiency of c-Si solar cells.

One can physically distinguish monocrystalline from polycrystalline. Monocrystalline solar cells give a more aesthetic and premium look. They typically have a black hue. Each corner of the cell is clipped, giving them an octagonal shape.

Unlike monocrystalline, polycrystalline silicon is composed of several small crystallites. It is a non-homogeneous material and shows a discontinuity in electrical, thermal, and crystal properties.

Because of defects in the crystal structure, poly c-Si solar cells are less efficient than mono c-Si cells. The highest lab-scale efficiency published is 22%, and in production, it falls to 18–20%.

They show a different physical appearance than mono. Polycrystalline silicon cells give a bluish hue with a metallic shine.

Thin-film solar cells are newer photovoltaic technology and consist of one or more thin films of photovoltaic materials on a substrate. Their primary advantage over traditional crystalline silicon cells is cost. They are cheaper. It holds less than 15% of the global market as of 2016.

Another advantage is flexibility. The thickness of the film is in nanometers. That makes thin-film PV cells pliable. However, we can manufacture rigid thin-film cells when the substrate used is rigid.

Cadmium telluride (CdTe) solar cells use Cadmium telluride to absorb solar energy. They remain the most prominent thin-film cells because of a lower manufacturing cost and lower carbon footprint.

CdTe shares 5% of the total photovoltaic market. These PV cells have an advantage of a low production cost compared to the convenient c-Si cell. But they are inefficient. The highest known lab efficiency is 22.1% by First Solar. This value falls to 16.1% on a commercial scale.

First Solar, America’s largest solar manufacturer, is a leading provider of CdTe cells. And the company has been investing in R&D to increase the efficiency of CdTe.

The toxicity of cadmium and scarcity of tellurium in the earth’s crust is another major problem that limits its acceptance.

Amorphous silicon (a-Si) solar cells use amorphous silicon as energy-absorbing material. We can deposit non-crystalline silicon on the glass to give rigidity or on the plastic to give flexibility.

There are several advantages of a-Si. It is abundant in the earth’s crust and is non-toxic. Besides, silicon has semiconductor properties and can absorb solar energy in a broad spectrum.

One major shortcoming of amorphous silicon PV cells is very low efficiency. In labs, the maximum efficiency reached is around 12%. The value degrades largely on a commercial scale. It is between 4 to 6%.

To overcome the efficiency barrier, researchers have come up with some modifications to a-Si cells. For example, the pairing of a-Si with microcrystalline silicon increases efficiency.

Emerging solar cells is third generation technology. Since they are in a developing state, we will find them mostly in research laboratories. This type has recently got a lot of attention. These cells are much cheaper and easy to produce by the roll-to-roll method. However, none of them has shown commercial efficiency similar to crystalline silicon cells.

The most popular of them are dye-sensitized, organic, CZTS, perovskite, and quantum dots.

Dye-sensitized solar cells (DSSC) use organic dyes to absorb photons from solar energy. The main components of the cell include dye molecules, titanium dioxide nanoparticles, and an electrolyte solution.

As of 2019, the lab efficiency of DSSC goes between 12 to 14%. And the efficiency trend shows it will increase in the coming years.

The major disadvantages of DSSCs are a degradation on exposure to UV, temperature instability, and costly ruthenium dyes. The electrolyte solution used is in the liquid state. So, it can expand or contract with temperature and cause damage to the cell.

Organic solar cells (OSC) use conductive organic molecules to absorb light and transport them to electrodes. These chemicals in OSCs are cheaper and easy to produce. Fullerene and its derivative is the most common organic molecule used in OSCs.

There are many variants in OSCs, like single-junction, heterojunction, continuous. In 2019, researchers had reported an efficiency of 12% for OSCs.

The main shortcomings of OSCs are lower efficiency, lower stability of organic compounds, and lower strength.

Copper zinc tin sulfide solar cells (CZTS) are similar to CIGS and are often thought of as a replacement for it. CZTS has an advantage over CIGS since zinc is a cheaper option than indium. Also, all the elements in CZTS are nontoxic compared to CdTe.

The highest lab efficiency published is 11%. Many companies, like Solar Frontier, IBM, have shown interest in CZTS. The future prospect of CZTS seems very bright since significant improvements have been achieved over the past two decades.

Perovskite solar cells consist of perovskite compounds. A perovskite is any compound whose crystal structure resembles that of calcium titanium oxide. The most common perovskite used in solar cells is methylammonium lead trihalide.

The major breakthrough in perovskite cells came in the last ten years. The efficiency of cells has increased from 3.8% in 2009 to 25.2% in 2020. That is an incredible jump. And it is the reason why scientists are giving more attention to this type.

Another advantage is the low cost of raw materials. The chemicals used in perovskite cells are relatively cheaper. However, perovskites have a major setback, i.e., the stability of the material. When exposed to heat, moisture, snow, perovskite cells degrade quickly.

Quantum dot solar cells (QDSC) are quite an amazing concept. They use something called quantum dots as photovoltaic material to absorb light. In simple words, quantum dots are tiny particles in nanometers that have semiconductor properties.

A major advantage is the bandgap of quantum dot cells is tunable depending on the size of a quantum dot. It means we can design a cell that can absorb an entire spectrum of sunlight, including the far-infrared. That is impractical in convenient silicon cells. As of 2020, the highest known efficiency is 16.6%.

How To Use Solar Panels Without A Battery

Custom Solar Panels: What You Need To Know!