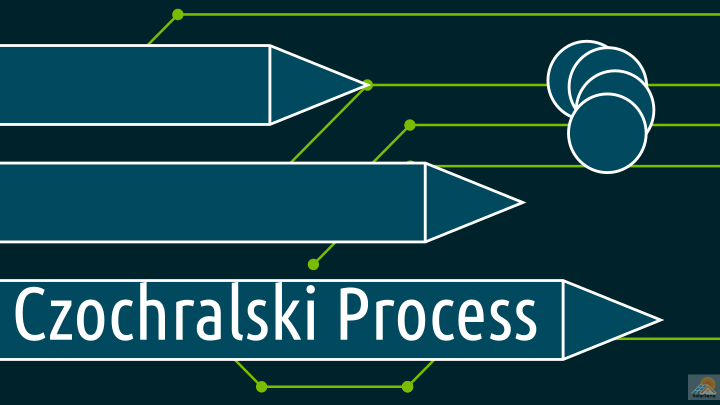 The Czochralski process is a crystal-growth process used to produce a single large crystal. Today, the process has been largely adopted in the production of monocrystalline silicon. But it has other applications also. Other names of it are the Czochralski method and the Czochralski technique.

The Czochralski process is very effective in producing ingots. Ingots are a pure piece of material. In a single-crystal ingot (boule), the entire material is one single piece and has uniform crystal properties. They are the base materials in the semiconductor and photovoltaic industry.

The most common example of a single crystal material is monocrystalline silicon (mono c-Si). Silicon is a fundamental element in semiconductors. You can find them virtually in all integrated circuits, which are in your phones, computers, and other electronics.

Another major use of monocrystalline silicon is in the production of solar cells. Silicon wafers, which are sliced silicon ingots, are an indispensable part of solar cells.

We can also produce single crystals using the Bridgman–Stockbarger method.

The Czochralski process is named after the polish chemist Jan Czochralski. Born in Kcynia, Poland, in 1885, he remained one of the most influential scientists of the silicon age, but few knew about him.

After completing his education in metal chemistry, young Czochralski joined AEG, a German electrical equipment producer, in 1907. Working as an engineer at AEG in 1916, he accidentally discovered what we now call the Czochralski process.

The story goes as: One day in 1916, Czochalski was busy studying the crystallization of metals in the lab. A crucible containing molten tin was abandoned on his table to cool. Lost in his thoughts, he accidentally dipped his pen in the crucible instead of the inkpot. Realizing the mistake, Czochalski quickly pulled out the pen. And he saw something unusual. The nip of the pen had a long stripe of crystallized tin. And the discovery was made.

The discovery might be an accident, but the perception wasn’t.

Later on, Czochralski replaced the nib with a narrow capillary to initiate crystallization. He analyzed the crystal and found out it was a single crystal. In his experiments, Czochralski had produced millimeter wide crystals and 190 mm long. In 1918, he published the results in a German chemistry journal as a new method for measuring the crystallization rate.

More than 20 years after the discovery, his method was first used in 1941 to produce the first germanium solar cell and later silicon.

Many improvements have been accomplished in the process since the 1920s. However, basic science remains the same. Today, over 90% of the world’s silicon producers use the Czochralski process to produce single-crystal silicon. With advances in the process, we can grow a crystal as long as 2 m with a diameter of 400 mm that weighs over 450 kg.

Before moving forward, it will be useful to acquaint readers with some common terminologies.

The diagram below represents a simple industrial schematic of the Czochralski process. The description of the main elements in the diagram is as follows:

As mentioned earlier, the diagram is a simple schematic and does not include several minor details.

Proper handling of the material is necessary. To assure the final product is a high purity, crushed silicon needs to be extra pure. And the vessel, especially the crucible, must be devoid of any unwanted particles.

Keeping high temperatures for a while removes any tiny bubbles present in the melt. It decreases the chances of deflects during crystallization.

A seed with a known crystal orientation is lowered and partially dipped in the melt. The vertical motion of the seed is controlled by the shaft.

As the seed starts to melt, it is slowly pulled upward and at the same time rotated. The rotation of the seed and crucible increases homogeneity.

When the seed is lifted upward, it carries a small portion of the molten liquid with it due to surface tension. It causes cooling and crystallization of the liquid portion near to the seed.

The first pull is very crucible. It is such that the diameter of the growing crystal is decreased to a few mm. This method is the dash process, pioneered in 1959 by W.C. Dash. By reducing the initial diameter, the number of dislocations created in the crystal is minimized. A narrow path breaks the growth and movement of existing dislocations.

The reduced diameter region is the neck of the growing crystal. By regulating the temperature profile and pulling rate, the diameter of the crystal is gradually increased. In the process, the conical region, or shoulder, are formed—see the figure below.

However, there are many challenges to have a constant diameter ingot. Things become more complex as the crystal grows. Because of various parameters, like the temperature profile, the concentration of impurities, the dopant percentage, velocity fields, defects, changes with the melt depth. As a result, controlling the homogeneity of the crystal becomes complicated.

In our hands, we have five parameters to maintain the diameter and homogeneity of the monocrystal.

By manipulating the above parameters, we try to achieve a homogeneous ingot.

In practice, a produced ingot will always contain some degree of inhomogeneity. The concentration of impurities and dopants will increase from head to tail. The explanation of this is covered afterward in the article.

The final stage is also crucial. Any recklessness can generate thermal shock due to the temperature gradient, which in turn produces dislocations. The produced dislocations can propagate to the entire crystal and damage it.

Argon gas provides an inert environment in the process. The gas is charged from beginning to end to avoid chemical reactions due to high temperatures. And it also carries silicon monoxide (SiO) and carbon monoxide (CO) gas produced during the process with it.

The vessel is also vacuumed before the start of the process to remove foreign contaminants, including oxygen.

The quartz crucible used in the Czochralski process consists of SiO2. At high temperatures, it dissolves to some extent and gets mix with the melt. The melt is molten silicon (Si).

The formation of SiO increases the presence of oxygen in the melt. From the melt, a portion of SiO gets embed into the monocrystal, and some amount of it evaporates from the container.

The vessel contains several parts that have carbon in it, such as the graphite susceptor, pulling shaft, heater. Carbon impurities are also present in polysilicon. In a hot environment, carbon can potentially react with oxygen to form carbon monoxide and may dissolve into the melt and finally end up in the monocrystal.

Impurities are undesirable, and considerable presence degrades the performance of the end product. The degradation of the product is due to inhomogeneity. Impurities also interfere with the electrical and electronic properties of semiconductors.

One common impurity in silicon ingots is oxygen. Since the melt and crucible are in physical contact with each other, oxygen easily passes into the melt from the quartz crucible. The research says the presence of oxygen has both beneficial and detrimental effects on the crystal.

The detrimental aspects associated with oxygen is that it forms precipitates. Having oxygen precipitates at unwanted points hinders charge carriers. And consequently, it damages electrical properties. The positive side is the precipitation increases the mechanical strength of the crystal. An optimal concentration of oxygen can help to overcome the negative effects without compromising positive effects.

Besides oxygen, common foreign elements in silicon are aluminum, carbon, copper, iron, antimony, and arsenic. Boron and phosphorus are also present in silicon as a dopant.

Impurities in the crystal will always be present. The way to measure the distribution of foreign particles is through the segregation coefficient.

The segregation coefficient is the ratio of the concentration of an impurity in the solid to that in the melt. Both solid crystal and melt must be in thermodynamic equilibrium.

How does it affect the distribution of impurities?

When the value of the segregation coefficient is high, the impurity in the solid will be more than in the liquid. And when it is low, the liquid will have more impurity.

Most impurities have a low segregation coefficient. It means impurities prefer to stay in the melt than the crystal. It may seem good that the monocrystal will always be purer than the melt in the crucible. However, there are negative effects to that.

This prejudiced distribution of impurities causes inhomogeneity in the crystal. Let’s take the example of carbon, which is a common impurity.

Because of the equilibrium, the same is reflected in the crystal. From start to end, the carbon concentration will increase in the crystal. It is true for all foreign elements that have a low segregation coefficient.

Thus, impurities always increase from head to tail in the crystal.

Apart from silicon, the method is also used for manufacturing ingots of other elements. Some of them include germanium, gallium arsenide, palladium, gold, silver. Many gemstones and systematic crystals are also manufactured using the Czochralski process.