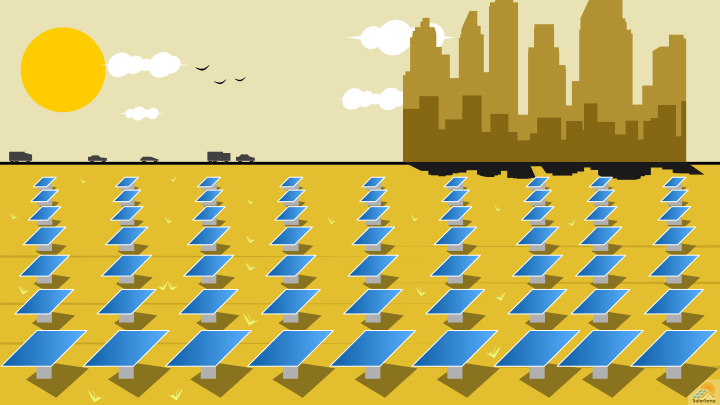 Have you ever visited a solar farm? Solar farms are large arrays of solar panels open to the sunny sky. Rival to power plants, they are large-scale photovoltaic systems capable of producing power at utility-scale.

According to Wiki-Solar, in late 2019, the world had 1200 solar farms, having a total power capacity of 400 GWAC. In the last decade, many businesses have shown interest in solar power stations since solar farms have some supreme advantages over other power stations. As a result, there is a surge in the number of solar farms in many countries, including the USA. It has also strengthened the solar market. However, we should not forget the downsides of solar farms. In this article, we will discuss all the pros and cons of solar farms.

Comparing the pros and cons of solar farms

Here is a quick comparison of all pros and cons of solar farms.

Solar Farms are getting popular in the United States because of the immense availability of open lands and favorable climate. Let’s look at all the advantages of solar farms that have to offer us. If you’re thinking about moving or building one on your land, you can dive into the pros and cons of living near a solar farm as well.

Solar farms produce electricity from sunlight, which is free and renewable. Solar modules absorb the falling solar energy and convert it into electrical energy. Unlike fossil fuels, the sun is eternal and believed to continue for the next five billion years. So, we are never out of the sun.

Photovoltaic power plants have an advantage over other power plants when it comes to maintenance. Solar farms are almost maintenance-free. The initial equipment cost is the primary cost of solar panel systems.

They do not consume any significant resources while in operation. Consequently, there is a very small upkeep cost. Solar modules do not degrade considerably over time and continue to work for 25 years.

Further, there are hardly any moving parts in photovoltaic systems, so no wear and tear of equipment. Once solar modules start running, they continue to deliver solar power for more than two decades without any care.

If you compare thermal power plants (coal, natural gas, nuclear) and other renewable power plants (hydroelectric, wind) with solar farms, they all have moving parts, especially turbines, and suffer from operational care.

We have to occasionally clean solar modules with water to maintain productivity. But the cleaning is very cheap and does not increase the maintenance cost substantially.

Fossil fuel power plants release an enormous amount of pollutants and chemicals into the environment, including greenhouse gases. The rising concentration of carbon dioxide is a prime threat to the world. On the other hand, solar farms have no emissions at all. They are very clean to the environment. There are zero direct emissions of greenhouse gases. Unlike nuclear power plants, they do not release any radioactive nuclear waste.

Photovoltaic technology is not yet fully developed. There is a huge scope in the development of better advanced solar cells and more economical manufacturing processes. If you follow past trends, it is expected that photovoltaic technology will improve over time. And the price per watt of power will decrease. In the coming future, the solar industry will grow and be more affordable to everybody.

For businesses and investors, solar farms are attractive opportunities. Since they have no operating cost, no maintenance, and very low recurring cost, they are one-time investments. The productivity of the photovoltaic system does not deteriorate much with time. Even after two decades, the plant keeps delivering power with the same panels.

The world still relies on fossil fuels for its energy source. Renewable energy contributes a fraction of the world’s total energy supply. Coal and natural gas power plants are one of the worst polluters and emit millions of tons of carbon dioxide annually.

By moving towards solar farms, we can alleviate the adverse effects of fossil fuels.

Solar farms usually have a break-even point around eight years; it is quite a long time. But after that, whatever revenue generated will be close to profit since they have low maintenance and operating cost. They will continue to pay for the next 17 years and on. You can evaluate the time to build the solar farm against the long-term returns.

If you ever toured a fossil fuel or nuclear power station, you will come to know these plants are very complex and require too much operational care and strict regulations for the safe running of the plant. The engineering and design of these plants are not so simple. They will require a specialized and skilled workforce to handle them. But in the case of photovoltaic plants, things are far simpler. The manpower requirement is very less.

Further, solar farms have an advantage over safety. Fossil and nuclear power plants have to deal with many safety procedures while in operation. There are also notable cases of deadly explosions.

Since solar farms do not have any running parts, they do not make noise. Passersby could sense tranquility near solar farms.

The equipment and machinery of solar farms are much simpler and less diverse than thermal power stations.

This point might not be very effective in comparison to other power plants because the same holds for others. Solar farms do boost the local economy and create jobs. However, most of the boost and job creation go to the early phase of the project, before commissioning. Moreover, the majority of jobs are temporary. Also, more jobs means more expenses, which in turn raises the cost of the power.

By looking at the pros of solar farms, it is clear solar farms have a bright future. But there are many drawbacks to them that are still to overcome. Here are all the cons of solar farms.

A threat to the local environment

Solar farms require a lot of land and open space, which are abundant in rural and remote areas. Unfortunately, these areas are also home to many animal species and support the local environment. Installing solar farms can lead to a negative impact on natural habitat.

The interference with local species also creates ripples of disturbances to neighboring habitat. Birds are also affected since their food mainly consists of insects that crawl on the ground. There is also the loss of flora if the farm is built on the local vegetation.

We have to incorporate the environment and habitat loss in the final evaluation of the project.

Photovoltaic technology is expensive and not affordable for everyone, particularly if you are from a developing country. Although the price has fallen quite, the high price remains a major challenge.

The cost of modules and inverters contribute to a great extent to the total cost. Further, solar installation is labor-intensive, and it additionally pushes the final price of power.

Although named being expensive, photovoltaic technology is able to produce power at the levelized cost of electricity equal to traditional power in numerous countries, that includes the United States, Australia, and Germany.

Solar waste, or better photovoltaic waste, is an emerging problem that is challenging the solar industry. Modules have a typical warranted life of 25 years. After years of operation, degraded solar modules retire and amount to solar waste. According to the International Renewable Energy Agency (IRENA), we are going to face a large amount of solar waste of decommissioned PV panels by the early 2030s. The world might have to handle millions of tons of waste by the end of 2050.

Hopefully, solar waste is recyclable. Manufacturers can extract the photovoltaic material and reprocess it to produce newer modules. Although governments and producers are already working to increase the recycling of degraded modules, more effort is necessary.

The sun will indeed last for the next 5 billion years. But the sun is not always available to us. We have good sun a few hours a day, mostly between late morning and early afternoon. At night, we have no sun, so no solar power. The solar farm will not produce any power at night.

The output of solar farms also varies with different seasons. Rain, hail, snow, and fog block sunlight from reaching panels. The light gets weaker and scattered as it passes through the cloudy sky. As a consequence, in summer, when the sky is clear and bright, we have maximum power production. In the remaining portion of the year, the output of solar farms is lesser.

The uneven distribution of solar energy across the globe is also something we have to consider. Solar energy per unit area received by the earth varies from region-to-region. For example, the regions closer to the equator receive better sunlight than the region closer to the poles. Because of it, the same-size solar farm will produce more power in the US than Norway.

The seasonal and sun dependence is something that we do not have any control over. It’s just natural and cannot be avoided.

One of the common problems with today’s smartphones is they do not have strong storage batteries. For that reason, we have to frequently keep charging our phones or rely on battery backups. A similar problem exists with solar technology.

Solar farms produce power electricity during the daytime. But at night and in the evening, the solar panel system will not work whatsoever. So, the grid will not be able to supply solar power to our homes in the dark. In this situation, batteries become convenient since we can store the energy in the day and utilize it at night.

However, the challenge with batteries is cost. They are very expensive and bulky. It is the reason why our smartphones and laptops become expensive and heavier when we want good battery life of the product.

Storing all the excess energy generated by PV panels is not a good idea. The economics of the solar farm might not work well. And the project might turn infeasible.

Take a lot of space

There is no doubt renewable energy has a bad reputation for large land requirements. According to a report by NREL, the one-axis photovoltaic system occupies 8.7 acres of land per MWAC. On the other hand, a simple analysis from strata.org says the coal plants in the US need 0.699 acres of land per MWAC. We can see the large difference between the two values. Solar farms take far more space than Coal power plants.

However, a good side of solar farms is that the land is easily recoverable. On the contrary, reclaiming the land used by coal or nuclear power plants is costly.

On the other side, the thermal efficiency of modern thermal power plants is between 35% and 49%.

Solar farms have the lowest capacity factor. It is only 24.5%. It means a solar farm capable of producing 200 MW will only give 49 MW.

Nuclear power plants have the highest capacity factor, and it is followed by natural gas power plants.

How Long Does It Take to Install a Solar Farm?

How to Get a Solar Farm on Your Land

Solar Capacity Factor: Why It is Important?